Fair Price,100% Natural pure Production and Supportive to Our partners

Today, scientists found amazing benefits of Saffron. They found that Saffron has some medicinal properties in spite of its food consumption. Improving digestion, curing of insomnia, strengthening the cardiovascular system, boosting body metabolism, and being fit are considered some of its medical features. Researches suggested that the elderly can prevent some health problems such as eye diseases, overweight, and diabetes by drinking cinnamon Saffron tea daily. The special effort of this Saffron brand is by supplying organic pure Saffron in the food and drug industry to be known as one of the well- known brands in organic products. Most of the people in the world know the name of Saffron and its unique medicinal properties. One of the surprising things about Saffron is its price. Per capita consumption of Saffron in the world is only 14 milligrams (equivalent to just a few Saffron stigmas). The main reason for the low global per capita consumption is the lack of Saffron production. On the other hand, there is a massive demand for Saffron consumption and   the low production and supply of it in the world are considered as the main reasons of fraud in the supply of saffron products to domestic and foreign markets. It is easy to produce fake Saffron so direct and indirect fraud occur in much of the Saffron available on the domestic or international market. What is the main cause of this fraud in the supply of Saffron? If the way of production, processing, packaging, standardization, and inspection methods are penetrable then fraud will be committed. This can be occurred in selling most of the products including butter, sugar, milk powder, wheat, barley, corn, vegetable oil, medicine. If the purpose of Saffron purchase is the use of it in the medicinal product, the use of pure Saffron is highlighted in order to obtain the best result. For readers and enthusiasts to be familiarized with the use of Saffron in drug industry and treatment, this site addresses some of the routine methods to produce fake Saffron. It is important that this kind of information will increase the knowledge of Saffron consumers for the use of it for medicinal purposes.

According to Eyjan CEO, who is also Saffron producer, if the consumption of Saffron in the medicine is increased, it has remarkable benefit for the community and also for the agricultural sector. This article introduces the exceptional value of this crop from the point of view of pharmaceutical aspects. Definitely, increasing the per capita level of Saffron consumption in families in Iran and other countries is the largest service to agriculture of this exceptional product which can help to the employment and the economy of Iran. This can be effective in developing instructions and reducing the migration of Saffron farmers living in the villages to cities and it is also decreased the depth of poverty and misery. 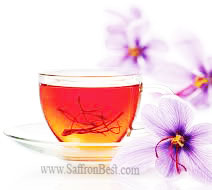 The history of Persian Saffron cultivation and its extension in Iran

The Persian Saffron cultivation has been commonplace in many parts of Iran's central plateau since ancient times, as some researchers consider the origin of Saffron from a medieval dynasty. In the Achaemenes era, Persian Saffron was used for building perfume and aromatic oils, as well as preparing a special bread for king's guests. During the Parthian period, Persian Saffron was considered as one of the goods exports to Rome.

At the time of Arab conquest of Iran, Larkins was used to naming saffron that with the spread of Arabic culture in the Persian dialect,  the word was changed to al-Za'fran, and then to its present form, Za'fran. After Arabs, then Iranian Muslims took Andalusia (Spain) in the tenth century, saffron was cultivated in this country. Subsequently, in the eighteenth century, saffron was cultivated in a region known as Walden in England, and today it is known as Walden Saffron.

Historical evidence suggests that saffron was cultivated in most parts of Iran, especially in central provinces, Hamedan, Isfahan, Fars, Kerman, and Khorasan.

The saffron cultivation is currently limited to Khorasan, Fars, Yazd, Kerman, Semnan, Markazi Province, and Esfahan, and the highest level (98%) of Persian saffron cutivation in Iran is mainly in the southern and central cities of Khorasan and some in the Estebahan province of Fars.