In the classification of Saffron types, after Saffron Coupe (negin), Cut Saffron (sargol) is the best type of Saffron which has the highest coloring power. Farmers gather the red and bulky stigmas separated from each other and the lowest parts of them not attached together and place them in a category which is called the Cut Saffron. Similar to Saffron Thread, the Cut Saffron has no yellow part or cream but the only difference between them relies on the size of the stigmas. Cut Saffron is about 3 to 4 millimeters shorter than Saffron Thread. The coloring power of Cut Saffron is between 210 and 230. The Saffron experts divided the Cut Saffron in two classifications, super premium cut Saffron, and premium Cut Saffron based on the thickness, length, flaccidity and frangibility. 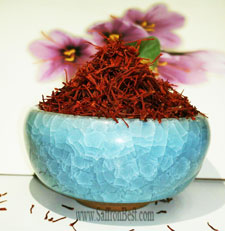