The first product of Saffron is Bunch Saffron which is the most common method of trading among farmers and producers. This type of Saffron displays the completed threads of Saffron from the red stigma to white root. The Saffron or Bunch Saffron is the natural Saffron available in the marker because no change can be seen in it. For collecting this type of Saffron, the Saffron stigmas associated with cream are collected together to form a cluster and finally a strand is used to wrap the cluster from the middle part of I and is dried without any change in the cluster. Dasteh or Bunch Saffron is used to collect Saffron Coupe, Thread and Cut Saffron.

Iranian Saffron is one of the products that have been commonly cultivated in south Khorasan since ancient times. It is the most suitable crop for the high-density planting system in remote and deprived parts of the country. Because most of the country's saffron farms are located far from the center of the country and lack industrial and other manufacturing facilities. One of the characteristics of these parts is water scarcity. Saffron is considered as an over-strategic product in the central and south Khorasan regions. 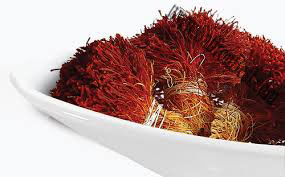