Aroma of the Iranian Saffron

Aroma of Iranian Saffron is related essential  which is develop by distillation of the oil with water, This liquid substance is colorless and the intense aroma of the Saffron is related to this substance .extract essence absorb the oxygen simply and then finally turn to a brown liquid called safranal (c10H140)

Oily essence of Iranian Saffron is extremely unstable and it’s not marketable.

Persian Saffron has been known as the most prized cultivation product and also the precious  spice in the world has special stand among industrial and importing product of  in Iran, at the moment Iran ranks first among the largest Saffron producers in the world and 65percent of world production of this red-gold proudly belongs to Iran .

center and southern area of Khorasan, based on this fact focusing on the import-export and product of this precious plant has been increased. 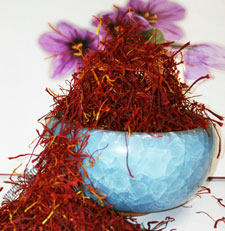 Tagged under
back to top